A Message of Unity, Healing, and a Vision for the Future from the President-Elect

Sore winners should stick to a more uplifting tone, if not in words, at least pictures...pictures of oneself in all one's glorious spectacle surrounded by the court of jesters. (Don King may soon be appointed Trump Special Counsel to Black and Bootstrapping, a self-help initiative just released in its draft stage by Steve Bannon). 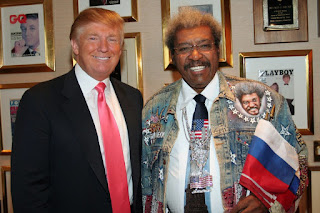 Love the jacket, Don. I'm not sure, but think flag protocol would call for displaying an American copy alongside the Russian one (but maybe this is just when official government business is being done). More like this: 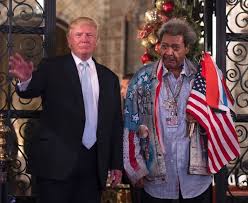 Despite Bill Maher's sarcastic (about Trump) and disrespectful (about Jesus) Tweet,

, Americans should recognize what  may be a prototypical remaking of the archaic Presidential press conference. This way, reporters in awe of the palatial backdrop and the sideshow may be distracted enough to follow up on tough questions, like, what is it about Russians, computers, hacking,...etc., and so forth? and be totally unable to distill the import of brain shit-shots like this from the boss-to-be:


“I think we ought to get on with our lives, I think that computers have complicated lives very greatly. The whole age of computer has made it where nobody knows exactly what is going on. We have speed, we have a lot of other things, but I’m not sure we have the kind the security we need.

Another sticky issue Commander Tweety may be trying to avoid are is the one of his bigly businesses vs. the Emolument Clause (Article II, Section I, U. S. Constitution). Not a problem, says Commander T.:

"It's not a big deal — you people are making it a big deal, the business, they all knew I had big business all over the place,..."

Feel better already? Not quite yet? Maybe this will help. Happy New Year!