Four Years of Pettiness and Lies?

The Tweets posted by His Orangeness since the election have been consistently non-presidential. It seems that this is what we're going to be stuck with for the next four years: a steady stream of childish insults and outright lies.

Trump took umbrage last night at actress Meryl Streep's criticism of him, and reacted not only by impugning her reputation but by denying the easily verified claims she made about him. He called Streep "overrated" and "a Hillary flunky," and then denied having mocked a reporter with a physical disability: 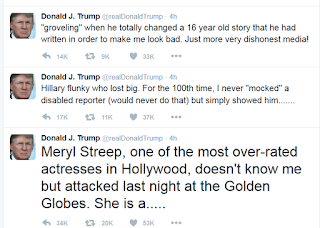 Most Americans saw Trump mock that reporter, either on the air or in endlessly repeated video clips. Anybody can look up the clip on Youtube and other sites, such as: